A national day of mourning is being held in Israel after 45 boys and men were killed in a stampede at a Jewish festival as officials face growing scrutiny for ignoring warnings about safety lapses at one of the country’s most visited holy sites.Flags flew at half-mast across Israel, and sports and cultural events were cancelled.All those killed in the disaster at the Lag B’Omer festival have been identified and all but one of the dead have been buried. Funerals of the victims paused during the Jewish Sabbath between sundown Friday and sundown Saturday.

At least 150 people were injured in the crush.One person who attended Thursday night’s event is still missing.

The disaster at Mount Meron has also reignited a debate over the role of the ultra-Orthodox minority in Israel and the refusal of some of its leaders to acknowledge the authority of the state.

More than half of Israel’s population are now fully vaccinated against Covid-19 and many restrictions have been lifted. But there remains a limit on the numbers allowed to attend public gatherings. Officials had authorised 10,000 people to attend the Lag B’Omer festival. but festival reportedly drew some 100,000 people, most of them ultra-Orthodox Jews. Powerful ultra-Orthodox politicians reportedly pressured Prime Minister Benjamin Netanyahu and others to lift attendance restrictions. 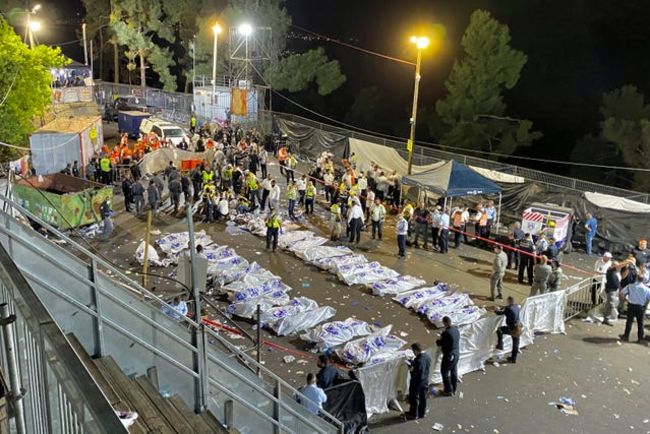 Experts have long warned the site was inadequately equipped to handle a large number of visitors on the holiday, and that the existing state of infrastructure was a safety risk.

According to witnesses and video, the stampede began when large numbers of people thronged a narrow tunnel-like passage.

People began falling on top of each other near the end of the walkway, as they descended slippery metal stairs, witnesses said.

Ultra-Orthodox Jews who attended the event said police blocked off an important alleyway, leading to problems with the flow of people and ultimately, to the tragedy.

Velvel Brevda, a rabbi who witnessed the stampede, said the barriers put up by police prevented people from leaving through exits that were open in previous years.

“Where should we leave from?” he said. “And the officers who were there couldn’t care less.”

Several retired police commanders told Israeli TV channels over the weekend that during their years on the job they came under intense political pressure to accede to the wishes of religious politicians. They said they had no authority to enforce safety regulations, such as limiting attendance.

Yosef Schwinger, head of the the national holy places centre, said in an interview just hours before the stampede that Interior Minister Aryeh Deri of the ultra-Orthodox Shas party “fought like a lion” at a Cabinet meeting to allow the festival to take place unimpeded. Schwinger said Deri deserved credit for “saving” the Lag BaOmer celebration from a more limited format.

Spotify Car Thing is available for purchase with some catches