Tesla CEO Elon Musk used an anti-vaccine political cartoon to take a swipe at Bill Gates and the Microsoft Zune.

Musk tweeted an edited version of a cartoon, originally created by conservative artist Ben Garrison, depicting an illustrated version of the Microsoft cofounder.

Musk deleted the tweet about two hours later, after it had been shared more than 5,000 times.

The original cartoon carried the title “The Plannedemic.” It appeared to show Gates leaning over a step-by-step plan for instilling fear with the coronavirus pandemic and eventually launching a “Mandatory Vaccine Rollout.” 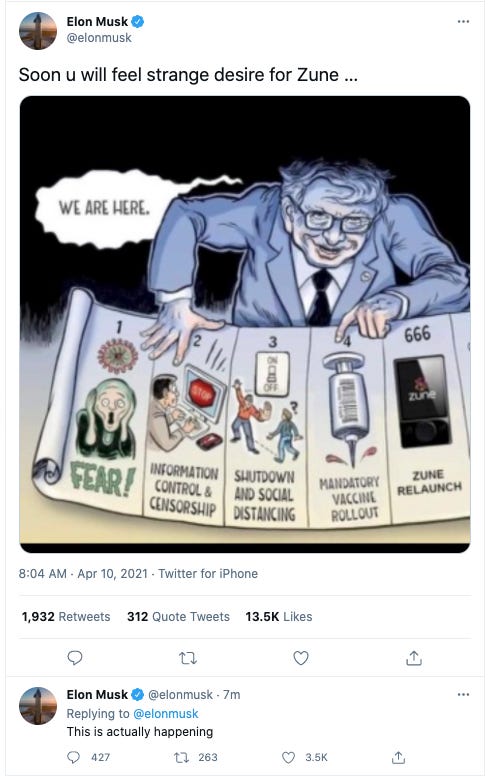 In the edited version shared by Musk, the vaccine rollout has been moved forward in the list, and a new final step has been added: “Zune Relaunch.”

“Soon u will feel strange desire for Zune …” Musk wrote just after midnight on the West Coast. In a follow-up Tweet, which was also deleted, he said, “This is actually happening.”

Microsoft’s Zune MP3 player, an iPod competitor, was launched in 2006. The company stopped production on the Zune in 2011.

Through the Bill and Melinda Gates Foundation, Gates has long been a vocal proponent of vaccines, including those being used to fight COVID-19.

Some who oppose vaccines have spread conspiracy theories about the billionaire. One such theory claimed, without evidence, that Gates was seeking to secretly implant microchips into the population via COVID-19 vaccines. Gates has shot down such theories.

It’s unclear why Musk deleted the tweet or whether he intended to fuel fears about COVID-19 vaccines by sharing an anti-vaccine cartoon.

The edited version of the cartoon Musk shared moved the “Mandatory Vaccine Rollout” into the spot originally held by “Blame President Trump!” in Garrison’s cartoon. It also cropped the illustration to remove Garrison’s name.

Garrison, a conservative cartoonist who supported President Donald Trump, earlier this year was suspended from Twitter, according to his website.

The Anti-Defamation League (ADL) said in 2017 that Garrison had published cartoons that were “blatantly anti-Semitic.” Last July, Garrison sued the ADL and sought around $10 million in damages, according to a complaint filed in US District Court in Virginia.

On his website, Garrison published a statement to accompany the original “The Plannedemic” cartoon.

It reads in part: “Why did a former computer nerd and mogul become so interested in vaccination and disease? Possibly because he’s worth over $100 billion and thinks he owns the world. He also wants to make an impact on humanity. Getting rid of excess humanity, that is.”

Valorant to offer more crosshair customisation in a future patch

NASA taps SpaceX for yet another mission, this time to Europa

Kaspersky warns about the potential dangers of downloading Windows 11

Arsenal and Tottenham among transfer suitors for Serie A attacker

Fake Windows 11 installers are being used to distribute malware

FBI warns cybercriminals are set to target the Olympic Games